Samsung Galaxy S6Apple iPhone 7 Plus 128GB
Back to: Mobile Phones 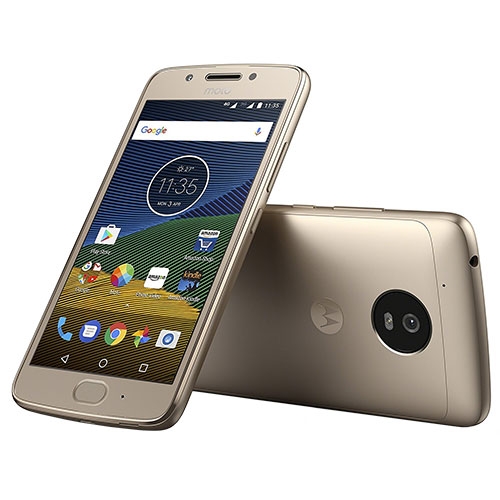 Motorola Moto G5 smartphone was launched in February 2017. The phone comes with a 5.00-inch touchscreen display with a resolution of 1080 pixels by 1920 pixels at a PPI of 441 pixels per inch.

The Motorola Moto G5 is powered by 1.4GHz octa-core Qualcomm Snapdragon 430 processor and it comes with 3GB of RAM. The phone packs 16GB of internal storage that can be expanded up to 128GB via a microSD card. As far as the cameras are concerned, the Motorola Moto G5 packs a 13-megapixel primary camera on the rear and a 5-megapixel front shooter for selfies.

The Motorola Moto G5 is a dual SIM (GSM and GSM) smartphone that accepts Nano-SIM and Nano-SIM. Connectivity options include Wi-Fi, GPS, Bluetooth, USB OTG, FM, 3G and 4G. Sensors on the phone include Proximity sensor, Accelerometer, Ambient light sensor and Gyroscope.
About Motorola
Motorola Mobility was established in 2011 following the split of Motorola into two companies, with Motorola Solutions catering to the enterprise segment. Acquired soon after by Google, Motorola Mobility was sold to Lenovo in 2014. Motorola made its first Android smartphone in 2009, and its first Android tablet in 2011.

There are yet no reviews for this product.